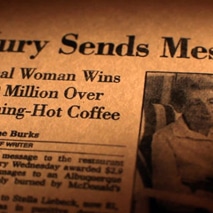 When conservative TV pundits, or “talking heads,” discuss the issues of cost-cutting, the conversation seems always to come back around to tort reform. While tort reform has been touted as the salvation of public programs and American healthcare, the fact is that tort reform doesn’t lower consumer costs or make health care safer; the processes continue in the same way, with no benefit to average citizens, premiums don’t go down, but they are still profitable to someone. The only difference is, instead of the citizen being compensated for their losses and paying the health care professionals  in their community, the insurance company profits and pays it out in bonuses for its executives. This takes enormous chunks of our national revenue further from the hands of the working and middle classes.

In the summer of 2011, HBO aired a documentary called “Hot Coffee,” that cross-examines the tort reformers’ perspectives on the justice system and what has been unfairly deemed a plague of “frivolous lawsuits” that began with the now-infamous McDonald’s “hot coffee” lawsuit. In 1994, a New Mexico court awarded 81 year old Stella Liebeck $2.9 million after she spilled a cup of McDonald’s coffee on herself, subsequently receiving third degree burns.  The coffee that scalded Liebeck was brewed at somewhere between 195° and 205°, a minimum of 20° hotter than the coffee at any other restaurant in the city. This particular case followed over 700 instances of McDonald’s customers reporting that they had received burns from the coffee.

Since the verdict, the case has been used by anti-citizen groups to symbolize what they claim is wrong with the justice system. “Hot Coffee” posits the theory that there is, in fact, nothing wrong with the judicial system.  Regardless, the American system of justice is under attack by what could be fairly called an anti-citizen rights movement under the banner of tort reform. This movement, driven by insurance companies, prefers profits over people and bonuses over fairness.

For public interests lawyer, Susan Saladoff, the popular perceptions that rulings and subsequent verdicts like those in the “hot coffee” case are “frivolous,” represents a threat to what is actually a fair system.  Challenging these perceptions, she offers her first film, “Hot Coffee.” The documentary cites the lesser known—or, at least, lesser showcased—facts of the particular McDonald’s case, including that the third-degree burns the victim suffered required numerous skin grafts and medical procedures. After years of small and unfair out of court settlements, McDonald’s had still not altered the brewing or serving temperature of its coffee, though it knew the damage it was prone to cause. Liebeck, her attorney, and some of the 700 other people harmed by this unwillingness to change believed it was time to give McDonald’s a reason to, in short, stop hurting people for profit.

Saladoff furthers her defense of the justice system by looking at the cases of other plaintiffs whose plights and settlements were held as unwarranted by public opinion. These case studies include a teenager whose brain injuries, which occurred as a result of medical errors, cost his family tens of thousands of dollars and requires him to live wholly with the aid of other people. Saladoff discusses Jamie Lee Jones, a woman whose employee contract with Halliburton threatened to deny her a jury for the rape and battery she allegedly underwent at the hands of her co-workers. Injustice is not frivolous.

There is simply no way to get the whole story of Ms. Liebeck in a few seconds. Sound byte justice is no justice at all and has an amazing capacity for resulting injustice. If people want to be informed—an oft forgotten obligation of citizenship—they should discover “all of the facts” themselves, by gathering the information, considering the source of that information, and weighing the bias. The worst thing a person could do, in pursuit of real knowledge, is take the word of a partisan hack in order to confirm their own previously-held opinions. We tip our hats to Susan Saladoff for her attempt to share a greater knowledge of important facts. Our responsibility, then, is to step outside of the inclination to validate our preexisting beliefs and to pursue new information.  Listening to news to simply confirm your own opinion or belief system is misplaced “knowledge.”

If you have been hurt, physically or financially, by someone else’s negligence, parsing who should be responsible for your situation is not that difficult: the person or entity that made the bad choices that caused or contributed to your injury should be held responsible. Cultures have leaned on that principle for thousands of years and, at Fisher Stark, we are determined to see clients get real justice, unaffected by unapprised public opinion. Call us to see how we can help.