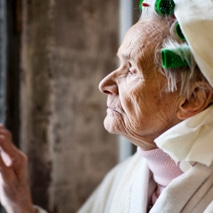 Identifying signs of  abuse in nursing homes can be difficult for most people.  The victims are often in declining health and mental ability.  If you believe that there is abuse or neglect occurring at your own nursing home or the nursing home of a friend or family member, contact a qualified attorney immediately.

Not everyone thinks to look for indication of nursing home abuse, but if you or someone you know lives in a care facility, there are signs which you should be aware. It’s up to friends and family, the most credible third parties, to be on the lookout for abuse warnings and to take action if they see them. Most of these are pretty instinctual but, often times, people think that they are natural occurrences of a nursing home environment; they’re not.

The first thing you’ll notice about an abusive facility is the smell. Sometimes, residents at a nursing home are unable to get to and from the restroom without assistance, or have trouble with bowel or bladder control. The responsibility of the nursing home staff is to respond promptly to residents’ requests for assistance in such cases by helping them to the bathroom when they need to go (not ten or fifteen minutes from that point), swapping out bed pans in a timely manner, and changing clothing or bed linens immediately after they have been soiled. If you’re in a facility and it smells like waste, the staff is not doing their job or the facility is understaffed and isn’t providing the right care for the residents.

Pay attention to the staff.  Are they assisting the residents or are they talking on their cell phones, standing around, or taking smoke breaks.   A nursing home, just like any other business, is only as good as the level of professionalism it demonstrates. If employees are doing things other than their jobs, then they are not adequately taking care of the residents. In cases of nursing home abuse, you may see things like food trash in rooms, or see trays of food left for incapacitated bed-residents, but no nurse to feed the resident. Nursing homes are notoriously understaffed as it is so it’s imperative that the people who are running the home are on top of their game and able to respond quickly.  Many of the residents at a nursing home require specific medical care that they’re only receiving if the staff—each person on the staff—is attentive to their needs and is paying close attention to the schedules laid out by personal care plans.

One of the most important things you can do to spot abuse is to listen to the residents and take note of their condition. Do they consistently complain often that they are hungry or thirsty? Does the resident rapidly gain or lose weight? Does he or she seem withdrawn or agitated? Is a staff member purposefully frightening, humiliating, or insulting residents?   If you see a nurse or other staff member threatening or demeaning someone, chances are that isn’t the first or last time that a resident suffers at the hands of the bully they depend on for medical care.

Physical abuses like assault, rape, or battery are less common in nursing homes, but still occur unacceptably often.  Those indicators may only be noticeable by the appearance of welts, bruises, or cuts. Do they sustain suspicious injuries, like broken bones?  Can the caretaker adequately explain the resident’s condition?

If you ever see a caretaker strike, slap or shake a resident, unreasonably restrain a resident, or confine them to their room, contact the Director of Nursing, the Administrator, and your social worker right away.

Nursing home abuse and neglect are terrible facts of some nursing homes.   It’s hard to know what to do when you realize that you’ve seen signs of nursing home abuse. The natural inclination of people is to try to handle things in a non-adversarial manner. Airing your concerns to the Director of Nursing is usually the first step in taking action against nursing home abuse or neglect. You can also file a complaint with the State Licensing and Certification division, which is required to investigate your claim.  Complaining to the people in charge and other authorities may lessen the likelihood of future abuse but that system is not designed to correct and compensate for the past harms.  To do that, you will need to see an attorney.

The attorneys at Fisher Stark are committed to stopping nursing home abuse. We know that you want quality care for your loved one; they deserve it. Fortunately, the rights of nursing home residents are protected by State and Federal law. We’re here to make sure that care facilities obey that law and provide the care and compassion that they’re supposed to. If you suspect abuse or neglect in a nursing home, don’t hesitate. Call us at (828) 505-4300 to see how we can help.