What are the Most Common Car Accident Injuries?

A staggering 46% of people were injured out of the reported 275,067 traffic accidents in North Carolina. According to the NC Department of Transportation’s 2017 Traffic Crash Facts, these numbers have only slightly decreased from the year before. The state’s efforts to improve highway safety is slowly but surely making the roads safer, but it is an uphill battle. The risk of being injured while driving is still very high.

The types of injuries caused by a car accident fall into two categories: impact injuries and penetration injuries. Although some injuries may be a combination of both. 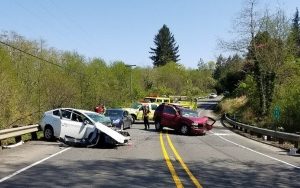 Impact Injuries: typically caused when part of a person’s body impacts part of the interior of the car, such as a head hitting the side window. These injuries can even be caused by hitting the airbag or being held back by a seatbelt.  Head injuries can result because of the brain moving back and forth and impacting the skull, whether the head itself hit something in the car or not.

Penetration Injuries: Typically cuts and scrapes, these injuries are often caused by shattering glass or loose objects flying inside the car. In serious cases, objects may impale a person.

The Most Common Injuries Suffered from Vehicle Accidents

It is not uncommon for car accidents to injure people in more than one way. Car crashes can hurt our bodies externally and internally. Some may heal on their own in a matter of days. Others may require weeks, months, or even years to recover. Others still can leave you permanently disabled. 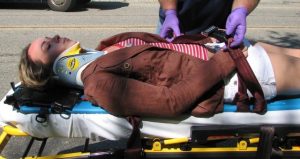 During a car crash, any loose object in the car becomes a projectile that can hurt you. Cell phones, toys, bags, cups, coffee tumblers, and more may be thrown around the car’s interior. These items can easily cut, scrape, bruise, or more seriously injure you.

The airbag and seatbelt can also cause such injuries. They may occur if your head or extremities come into contact with any part of the car’s interior or even if they collide with another passenger.

These skin injuries may be relatively minor and require no medical treatment. However, some can be extremely traumatic and cause lasting damage.

Soft tissue injuries are one of the most common, if not the most common type of injury caused by a car accident. These injuries damage the body’s connective tissue, including muscles, ligaments, and tendons. Within this category, injuries most often reported are whiplash to the neck and upper back and pain in wrists.

The sudden impact of a vehicle collision causes soft tissues to stretch, causing sprains and more serious injuries. Neck, mid-back and lower back pain may be due to a spinal injury. Ankles, knees, elbows, and shoulders are also commonly hurt. 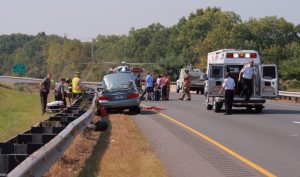 Head injuries can occur during a crash whether your head hits something in the car or not.  Head injuries can result because of the brain moving back and forth and impacting the skull. As mentioned before, objects-turned-projectiles can strike a person’s head. Colliding with another passenger can also incur damage. These occurrences can result in minor to severe head injuries.

From bumps on your head to concussions to brain damage, head injuries cannot be taken lightly. Even if your head does not come into contact with an object, you can still experience a traumatic injury. When your vehicle collides with another vehicle or obstruction, the force and sudden change in movement (whether a sudden stop or change in direction) cause not only your head but your brain to shift from the impact. Your brain may actually collide with your skull. As you can imagine, the soft tissue of your brain hitting your hard skull can result in a serious and even life-threatening injury.

Drivers are at the most risk of a chest injury due to their proximity to the steering wheel. But, all passengers of the vehicle are at risk of a chest injury, especially from the force of their bodies exerted on their seatbelt. Bruising and contusions may occur. Worse, drivers and passengers may suffer from broken ribs and other internal injuries. Punctured lungs, internal bleeding and more can result in hospitalization and even death.

Despite damages that may be caused by a seat belt or shoulder harness, it is still far safer to use safety restraints than not. Much worse is likely to occur if you are tossed around the car or even thrown from the vehicle. 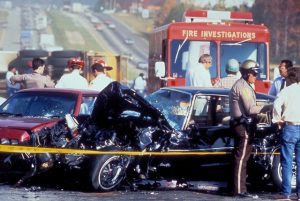 The force of an auto collision often causes our extremities to flail and whip around the car. Due to the close quarters, arms, legs, hands, and feet often hit parts of the car or other passengers. Arms and hands commonly come into contact with the dashboard, windows, and seats. People are even at risk of hitting themselves as their arms are thrown back. Knees, legs, and feet can suffer damage from hitting the dash or seat in front of them.

Such impacts can result in bruising, contusions, sprains, and even breaks. As explained before, soft tissue injuries of the joints may also occur. Vehicles that are crushed during an accident can subsequently crush an occupant. Legs are particularly in danger of severe damage from being crushed. Injuries from being pinned or crushed may result in amputation or complete loss of the ability to use a body part.

What to Do If You Are Injured in a Car Accident

It is important to seek immediate medical attention if you are in any pain or became disoriented at any point during or after the accident. Some people do not experience pain until a day or more after the accident. In such cases, you should still consult a doctor as soon as possible. It is always better to err on the side of caution where your health is concerned. Emotional trauma caused by an accident can also have long-lasting effects, including PTSD. If you are experiencing fear or anxiety, refer to your doctor or a mental health specialist.

If you were injured in a car accident, you may be entitled to compensation to cover your medical expenses and other damages. If you have been in an accident and live anywhere in Western North Carolina, contact the Asheville car accident lawyers at Fisher Stark, P.A. for a free consultation.

We will work hard to get you the justice & fair compensation you deserve. Fisher Stark, P.A. is a highly respected personal injury law firm in Asheville, NC. We provide experienced legal help for clients in Buncombe County and all of Western North Carolina. Collectively, our legal team – Perry Fisher, and Brad Stark – have more than 40 years of trial practice, and have participated in more than 1,000 personal injury & accident cases. Call Fisher Stark, P.A. at 828-505-4300 for a free consultation.