Who Should Pay For The Cost Of Your Injury? 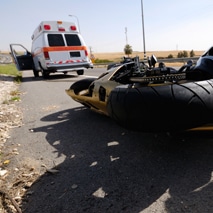 An individual sustained an injury in a motorcycle wreck through no fault of their own. The injuries suffered were a result of the negligence of another driver. The individual was informed by another attorney that they were only entitled to recover the liability limits of the negligent driver’s insurance policy. The individual’s question was, shouldn’t that person, or their insurance company, be responsible for paying all of his medical bills that resulted from the wreck?

The short answer is, yes. The person that was driving and caused the wreck should be responsible for all those medical bills and other damages that they caused in the wreck. However, in North Carolina, like many states, the liability limits of the policy are the extent of what an insurance company will likely have to pay in the event of a claim against their insured. So in this particular example, it may be possible, depending on the assets of the person who caused the wreck, to exhaust the liability limits on the policy and then continue efforts to try and collect monies from the responsible person. Those efforts would go outside the limits of the liability policy and look at other assets that person may have.

Often times that takes some creativity, and some digging on our part. We like to think we’re fully capable and qualified to do that; we’ve done it in the past. But it’s really an analysis that needs to be made after the accident has happened, obviously, and after some due diligence. So if you find yourself in that situation, I would suggest contacting an attorney and letting them take a look at it.

Please remember that every case is unique and requires specific analysis. If you think you need the services of one of the injury attorneys here at Fisher Stark, we highly encourage you to contact us.